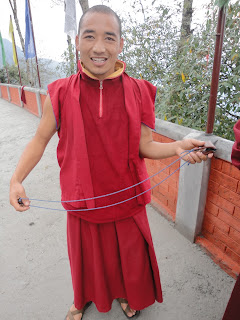 ...he just may put down his cricket bat to give it a try.  As I entered the grounds of this monastery, we found some monks playing cricket.  They were playing rather carefully since even a half way decent hit would send the ball plummeting several thousand feet to the river valley below.  A nearby terrace wall looked like a good target area to me and so I whipped out my sling out and gave it a try.  It just so happens that if you can catch a monk just after his yearly memorization exams he may be keen to try his hand at slinging.  "Guietro" as it's called here.  He shot backwards, sideways and then forward getting better with each shot.  We used the cricket ball that they had been playing with as I arrived.